How did the pilot project “Reunion” in Kumu Art Museum begin?

In the Erasmus+ learning mobility project “Implementation of international experience in the development of museum education in Kumu” we wanted to acquire new knowledge and experience for the creation of programs for different target groups. Within a year and a half the knowledge acquired during the trips has been implemented in the development and updating of almost all existing educational activities and we may gladly admit that new projects and series have been started. 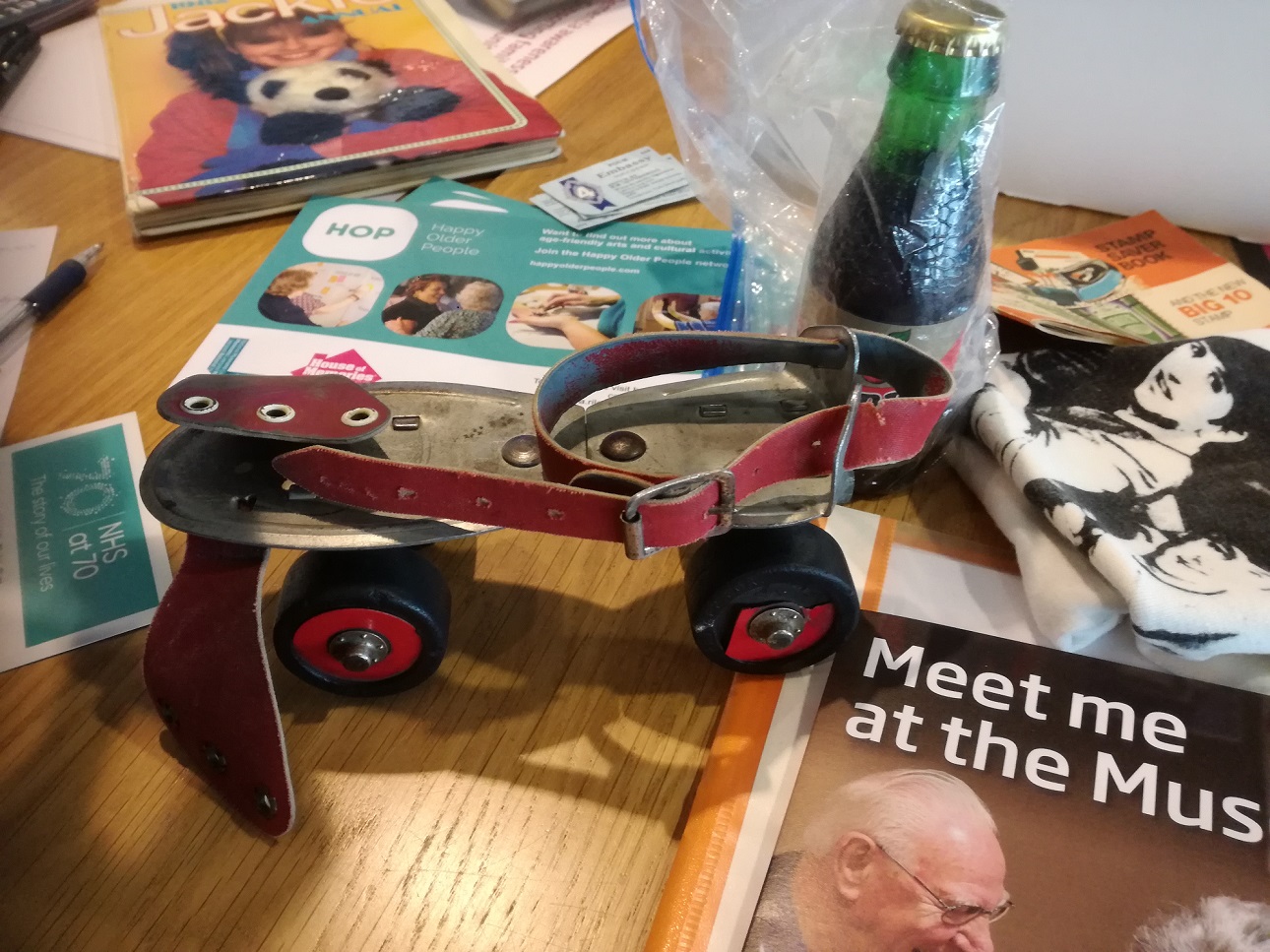 "House of Memories" – the content of a part of the program Memory Case in Liverpool Museum.

One of the goals of the Erasmus+ learning mobility project was to become familiar with various programs provided in different museums, targeted to the involvement of people with dementia syndrome and their family members/guardians. It is a well-known fact that the population of Europe, including the population of Estonia, is ageing and due to that the involvement of senior citizens and the provision of respectful aging in the society has become more and more relevant. As a museum we want to give our contribution and be open to the public as wide as possible. Based on the information and knowledge obtained during our learning mobilities, a new series called “Reunions” targeted to people with dementia syndrome and their family members/guardians, has we have launched in Kumu Art Museum. By today two meetings of the pilot project, which has proved to be very successful, have taken place so far. Next different projects, which have served as an example for us during learning mobilities, will be described as follows.

During the first learning mobility in the autumn of 2017 we took part in the international conference The Inclusive Museum in Manchester. At the conference we had an opportunity to attend among other presentations also the presentation by the education specialist Anouk Heesbeen from Amsterdam Stedelijk Museum titled as “Making Museums Unforgettable”, which introduced a project launched in the Netherlands, which, based on MoMa, is targeted to people with dementia syndrome in local museums. Heesbeen’s presentation gave a good overview of the basis such projects should be created on and the structure of the possible meetings. At the end of the presentation she demonstrated the audience some dialogue creating methods used in the educational program. The program started in Kumu Art Museum was based on the example of MoMA Meet Me and Unforgettable by Stedelijk Museum.

During the same mobility to Manchester we were able to visit Whitworth Art Gallery and see the exhibition “Beyond Dementia”, which explored living with dementia syndrome. Viewing and making art is a good way for a person with dementia to find contact with oneself, to make meaningful connections with the same kind of people, which at the same time improves the condition and the general welfare of the patient and the guardians. Similar results were achieved within the scientific study carried out within an Alzheimer project in Centro Cultural de Barcelona (CCB). The representative of the organisation Teresa Pérez introduced the corresponding project to us during our learning mobility to Barcelona. She forwarded the idea that the success of such activities greatly depended on planned collaboration. The partners of this museum included various organisations dealing with senior citizens of the city. A year later when visiting Bluecoat in Liverpool, we saw a good example how a creative centre collaborates with the Social Insurance Board to provide intellectually challenged people opportunities to make art and use studio premises, where active artist provide assistance to them. So we decided right from the beginning to involve the association the non-profit organisation Life with Dementia (MTÜ Elu dementsusega), which provided many-sided support and helped to spread information. In addition, we invited the students of creative therapy of Tallinn University to volunteer in the project.

Before the Kumu pilot project was launched, we took part in the training of House of Memories organised by the Liverpool Museum, which gave us necessary guidelines for the organisation of the meetings and confidence for the actual performance of the meetings. Their project draws major attention to the family members/guardians, who also need support, understanding and guidelines. Liverpool museums with different profiles have skilfully used objects from their collections to create eloquent materials for the meetings in the museums and interactive applications that can also be used in the domestic environment.

Ten people with dementia syndrome and their family members/guardians have taken part in the pilot program “Reunions” organised by the Kumu Art Museum. The meetings consist of two stages: the first part is in the exhibition hall and the second part is in the studio. During the discussion in the exhibition hall some pieces of art, carefully chosen to illustrate the theme, were introduced. The dialogue generated included the participants’ recollections of the period or certain items, giving comments on the composition and colours or providing simple descriptions. Further on the activity continued in the studio, where the impressions obtained at the exhibition were expressed visually by applying different creative therapy methods. The focus of the meeting was the dialogue, the recollections of memories and sharing emotions. Based on the participants’ feedback, we may state that the pilot project proved to be very successful and such kind of initiatives in Estonia are badly needed in order to draw the public’s attention to the disease. Dementia-friendly society enables people with dementia feel themselves respected and supported by the society and such kind of meetings provide people suffering from dementia syndrome and their family members /guardians beautiful memories and moments in the environment surrounded by art.