Actor and theatre director Mario Biagini talks about the power of creativity to make diverse voices heard, develop empathy, and contribute to adult learning and education. 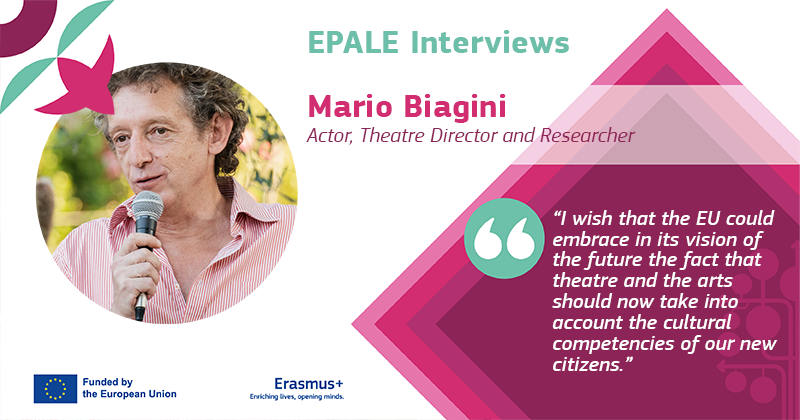 Mario Biagini is an actor, theatre director, and researcher. From 1986 to 2021 he worked at the “Workcenter of Jerzy Grotowski and Thomas Richards,” Pontedera, Italy, travelling and performing in many different countries. In 2007, he created a group, the Open Program, which he directed until 2021 and which gave life to a cycle of performances based on the poetry of Allen Ginsberg put to music and action. At the end of 2021, Mario left the Workcenter and dissolved the Open Program founding with other companions a new cultural organisation, "The Academy of the Unfulfilled” (Accademia dell'Incompiuto), based in Florence, Italy, as well as developing personal research on La ginestra o il fiore del deserto by Giacomo Leopardi, on poetical recitation, prosody, and philosophical practice.

Mr Biagini, please introduce us to the academy, Accademia dell'Incompiuto, you are a member of.

The Accademia, despite the name, is more of a nebula than a fixed group of people. In the last years, even during Covid, we have been working with people from South America, Asia, Europe, and the United States. Every time that we work with and in different countries, we bring there a small international group of people – a very diverse team. And in each country we often work with people who are non-professionals, of all ages from 16 to 70, and we interact with local traditions.

Somehow, we create occasions within each project to collaborate with people from different countries and create opportunities for individuals as well. For example, we just worked with a young woman from a small Italian city, a very talented singer. She worked with us on a project and is now supported by the Municipality of the city, Pontedera, which pays for her trips and supports her career. So in a way, the work of the Accademia has effects on the people involved – yes, on a very modest scale, but nevertheless important effects.

In your opinion, what are the biggest contributions theatre and the arts can make to adult learning and education?

The answer depends on what we consider theatre. We can consider theatre as a profession, or we can consider it as something that is very much ingrained not only in human history but also in human biology. Let’s look at it from this second point of view. From neurosciences and evolutionary biology, we know that there is a certain aspect of our life, which we often consider peripheral, but which is in fact essential to our development as human beings, namely the ludic instinct. The instinct to play is at the basis of many human capacities, e.g. the ability to invent solutions and the capacity to collaborate.

If we think of theatre as something ingrained in our instinct to play, we really see the potentiality of theatrical activity. I see it first in the sense that theatre can be used as a tool for pedagogy, at the service of a transforming civic society. We can e.g. use theatre in order to help young people approach philosophy, history, science, or literature. Then there is another aspect as well, related more to the basic functions of theatre, helping people to feel and experience what it is to be with others in an articulate context, with a common objective. It requires empathy and imagining a new world, a possible future. Comprehensibly, in many theatre circles nowadays there is the motto “We need to resist!”. However, in my opinion, this is somewhat a losing attitude because it means we fight to keep things as they are, to defend them against disintegration, while my feeling is that we rather need to be able to imagine how we want the world to be, and to fight for how we want things to be in the future, and not just to maintain a certain status quo.

Personally, theatre and acting offered me a tunnel, a sort of way to channel an excess of feelings, ideas, and visions, and it provided and provides great opportunities to be in touch with others – who constitute for me the most solid reality. Although I am not a therapist, I know that working closely with other people can give us a certain structure and offer the possibility of creating meaning, by relying on and supporting each other. Theatre work offers the opportunity to articulate oneself so that one’s voice can be heard. Even voices that are not – let's say – completely neurotypical can perhaps create their space and legitimacy. 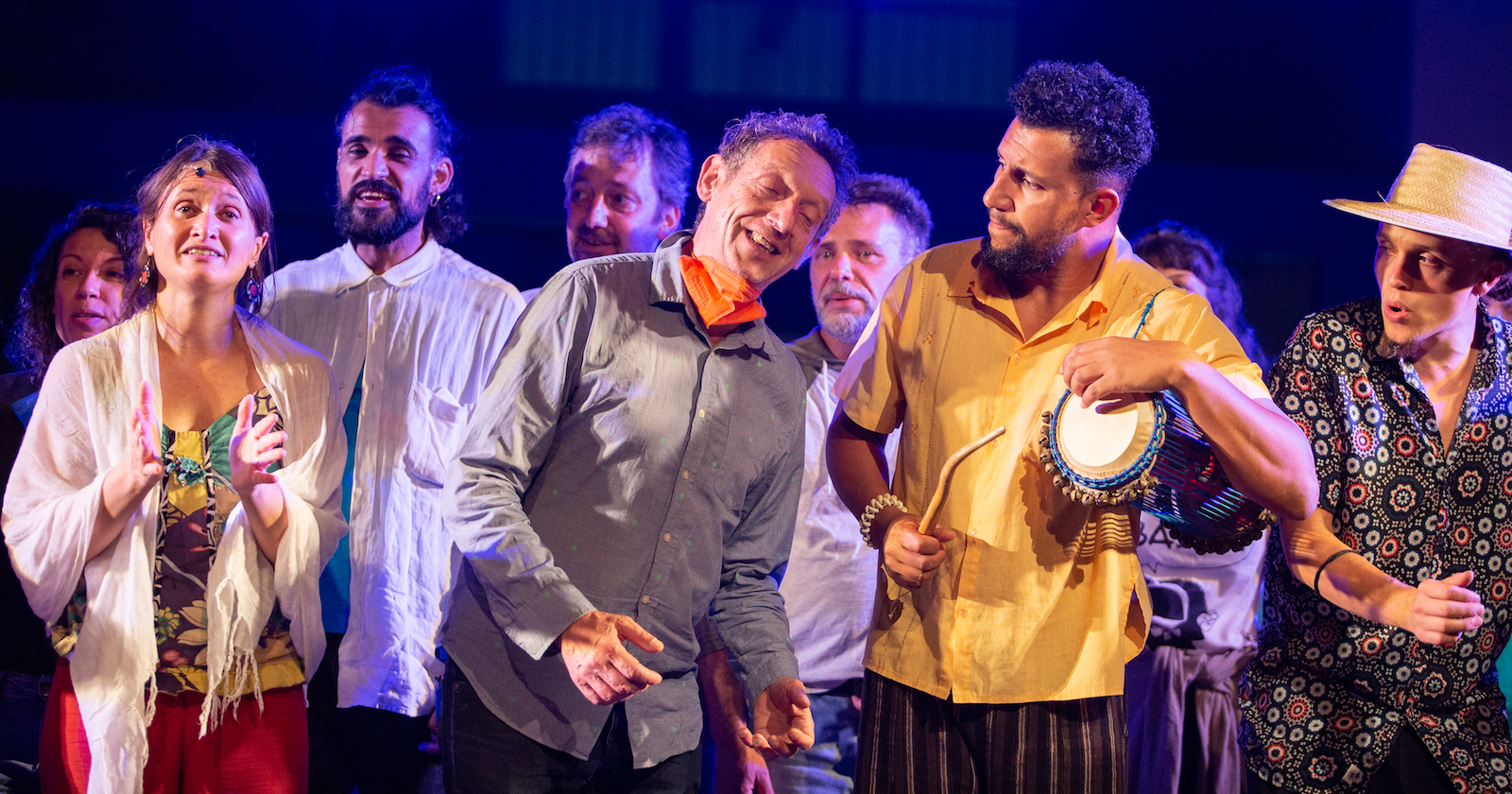 Recently, we have been talking a lot about culture and its importance on EPALE. Can you please tell us a bit about Words in Silence and what it can teach us about the need for culture?

We have recently been to Lithuania. There, there is concrete worry and deep preoccupation with the war. When we arrived there, I was thinking that the Lithuanians may have other things on their mind rather than creating a collective theatre piece in three weeks, but I was surprised: they were extremely engaged, motivated, and ready to play. At the same time, there is a very strong desire for the expression of what is one’s own identity, often in relation to national, linguistic, and cultural identity.

I confess that nowadays I worry about what it is we talk about when we speak of identity. Recently, identity seems to be something based on what we imagine the past was, often with a mythical conception of that past – that in the past things were better, a golden age. However, the fertile aspect of theatre is that, even if it is inevitably based on what we are made of, of the past that shaped us, it gives us the possibility to create a look into the future.

Words in Silence will be a bit of an experiment. It will be done with a small group of people of different nationalities on a beautiful island in Greece, in the mountains of Crete. We will stay in tents and explore what it means to speak poetry in a natural context. Poetry is a very peculiar human manifestation, with very strong formal and compositional aspects - let's say - artificial aspects. So the curiosity is, about how to speak it in nature, without violence or narcissism. We will base this approach on the experience of singing. Singing simultaneously teaches you to express and to listen. You can't sing if you don't listen to your environment, because you need to harmonise with the sonic landscape in which you are. So we are planning to do something similar, not with the melodies and rhythms of the sung language, but with the melodies and rhythm of the spoken poetic language. We will try not to lose the meaning of what we say but integrate it into the immediate environment, the wind and the sounds of where we are, and our friends, our colleagues or a person we don’t yet know. We want to see whether we can find ways to harmonise with each other and with the surrounding environment, pushing beyond traditional boundaries of expression.

The Academy is working on several international projects. What are The Thirsty Ones and how did that project help the Academy to strengthen its transnational roots?

The Thirsty Ones was one of the first steps of an effort that now gives shape to many of our contacts in Italy and abroad. It is a theatrical collective interpretation of the work of French poet and writer René Daumal, accompanied by music, dance and humour. It is a group creation, which we develop in different places with different people. Each residency creates a new version. Last summer we started to work with people in France, Paris, in the Theatre de la Ville. We then continued it in Italy with people from Pontedera, a formerly industrial town of about 30,000 people, a city with a great amount of immigration in the last 10-15 years. The city has become much more alive, much more cosmopolitan, and at the same time, many cultural contradictions have appeared. People there were not socially ready for the change. So the situation is complex, but it's a very good place to work. There the new version of The Thirsty Ones was created in a Circolo ARCI, which is a cultural association in Italy, an old tradition that was previously linked with the Communist Party. Circoli are very popular little bars. Then we created another version in Brasil, another in Lithuania, and the next will be in done in Germany.

Finally, your fairy godmother is granting you a free wish. What would you wish for the EU to understand about theatre and the arts?

You know, this is the most difficult question ever. What I would like the EU to understand is that theatre and the arts are not only what we professionally conceive of. I would define culture as the competence of articulated human interaction. Some communities – for example, communities with which we have been working for years – have a variety of cultural competencies that I wish we all had. I am thinking of the capacity to speak publicly, to successfully interact with each other, to dance and sing together, to welcome somebody into a place and to make them feel at home despite potential diversities.

I wish that the EU could embrace in its vision of the future the fact that theatre and the arts should now take into account the cultural competencies of our new citizens. They don't go to the theatre, they might even not know what theatre is as conceived in bourgeois theatre nowadays in Europe or the Americas. However, these new citizens have cultural competencies that – when united with the hope of a better life for everybody – are a great richness that needs to be valued and supported as part of our arts in the community.

Second photo within the post by Rei Santos Ciclo