Interview with Divina Frau-Meigs, sociologist and new EPALE expert on the crucial issue of media literacy for citizens in 2021

Divina Frau-Meigs, media sociologist, talks about the current challenges of media literacy for citizens in relation to her EPALE mission.

How did you get into media sociology?

Divina Frau-Meigs: I started by taking an interest in culture and language through sociolinguistics: I like to compare and find regional characteristics. That's why I turned to European projects. I have also participated, since the 1980s and 1990s, in all the debates on cultural diversity - for example, I represented my NGO at the UNESCO convention on cultural diversity. It was later that I turned to media studies, with a very broad approach, initially focused on the audience.

How have the issues addressed by media sociology evolved in recent years?

Divina Frau-Meigs: As the media has evolved, so has my profession. In recent years, a series of applications and platforms have changed the way things are done and have, for example, replaced the notion of audience with that of communities or echo chambers. Sociology, which was initially interested in mass media, now looks at a highly fragmented object and in individualised uses. It is more complicated to see and follow.

I am a specialist in risky content and behaviour: initially I focused on media panics, violence, pornography and a little on advertising. Today, the issues at stake are first and foremost the risks of misinformation and the quality of information. These are real democratic risks. I also work on radicalisation and hate speech issues with French and European colleagues. We are also seeing the emergence of the issue of privacy and its management by individuals and states - via the GDPR - but also positive aspects linked to the construction of online influence and the presentation of the self.

You are very interested in media literacy. From what angle?

Divina Frau-Meigs: As well as a media sociologist, I am also an education specialist, trained at Stanford University. First, I use the results of my research for active teaching practices. I have greatly contributed to the development of the concept of media and information literacy and have pushed for the evolution of the concept of "information literacy" in relation to the concept of "communication literacy" or info-com. This is a very French science, which does not separate the medium from the message. I contributed a lot to structuring this field which, at the beginning, was very embryonic. I have shown that it is also a public policy space and, with my association, Savoir*Devenir, I pushed for the European directive on audio-visual media services, in its latest version of 2018. This directive defines media literacy and places obligations on states in this area. Education in media literacy can be carried out anywhere, in and out of school.

Are there new issues at stake in the field of media literacy?

Divina Frau-Meigs: One issue that is increasingly present is the climate emergency. The digital sector accounts for 4% of pollution in general, and this is not widely known. There is a lot of greenwashing, a whitewashing of the toxicity of digital technology through representations that give the impression that big companies are fighting for the climate cause when in fact they are in a status quo that suits them perfectly. This comes in addition to fake news about the climate and climate change scepticism. But digital technology can be transformed in a positive way to change peoples’ way of thinking and to reduce pollution (less travel, less paper printing, etc.).

What are the new skills required for media literacy?

Divina Frau-Meigs: I have just handed in the final report of an Erasmus-type project won by Savoir*Devenir, called YouCheck! which highlights new media and information needs (funded by DG-Connect). These are largely visual literacy skills. In the digital world, entry is now primarily through images rather than text, and it is necessary to understand the data management mechanisms and algorithms that drive image recommendation. I am trying to build up a repository of skills in this area: understanding how an image is falsified, detecting the filters that falsify it, knowing the different types of image compression, carrying out research into reverse images.

Alongside this project, I am also running another Erasmus+ project on fact-checking with a dozen actors from eight countries. We are trying to find out if there is training in disinformation and fact-checking in higher education in each of these countries - which seems to be a necessity nowadays. This implies mapping what exists, and then, in a second phase, establishing a comprehensive training offer that could be taken up by States and institutions.

How do you see your mission for EPALE?

Divina Frau-Meigs: I was pleasantly surprised to be approached by EPALE, whose equivalent for secondary education, eTwinning, I was aware of. I am delighted that EPALE exists and is developing as a community of peers and practices. It is from the field that this community will advance, but it must be backed up by research.

Media, information and digital literacy is not very present on EPALE at the moment. I will try to highlight it, not only the notions of risk but also in a more positive way, looking at the opportunities in terms of online presence in particular. I would like to develop the notions of evaluation, self-diagnosis and transferability of certain tools. We will of course start from what already exists because comparative research shows that we are very rich in this area in Europe. 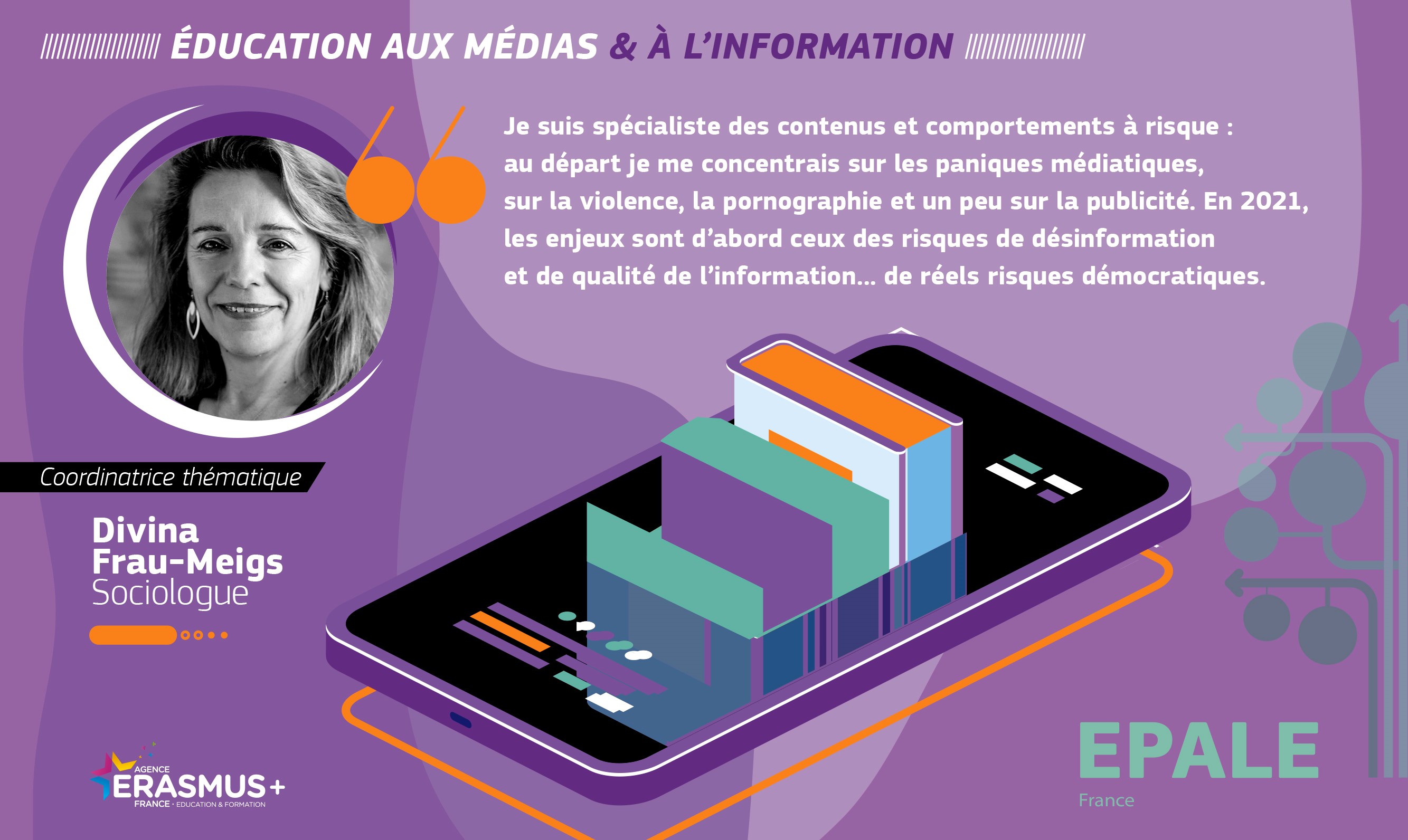