Jobs of the ecological transition: opportunities for all citizens?

“One million net additional jobs by 2030 and two million additional jobs by 2050”: this is what the European Commission projects that the Green Deal, a strategy formulated in 2019 at the beginning of the current European Commission's mandate, could achieve “to transform the European Union’s economy into a modern, resource-efficient” and carbon-neutral system by 2050. The challenge of this transition, which affects “all economic sectors”, is to “leave no region and no one behind”, explained Tim Van-Rie, representative of the European Commission's Directorate-General for Employment, during the EPALE web conference entitled “Jobs of the ecological transition: opportunities for all citizens?”

Jobs and the ecological transition: how will we achieve climate neutrality by 2050?

This trend will not be uniform. By 2050, says Van-Rie, some sectors will see a decline in employment, such as “mining, fossil fuel production or automotive production”, while others will see job creation, such as “the construction sector, the circular economy, product maintenance or certain local services”. The transition will also have major effects on existing professions, with the need for new skills. To support these changes, the European Union is providing financial resources, notably through the Recovery and Resilience Facility, the European Social Fund (ESF) and Erasmus+. It is also providing technical support promoting the exchange of good practice.

The Shift Project, a think tank on energy and climate issues, has also been looking at the effects of the ecological transition on employment. The think tank has drawn up a “plan for transforming the French economy” with proposals for meeting a +2°C trajectory in 2050 “in key sectors such as agriculture, construction and transport”, explains Damien Amichaud, who works as a project manager for The Shift Project. “We have developed these proposals on jobs and skills through a study on the four million jobs most affected by the ecological transition,” he says. The result: “For every 800,000 jobs destroyed, 1.3 million will be created”.

In the fields of agriculture and food, for example, “there is a lot of work to be done to reduce the use of machinery, chemicals and fertilisers, to be able to roll out agro-ecology more widely and to process products more locally”, he explains. Elsewhere, in the automotive industry, “electrification will have an impact on jobs”. But the expert invites us to “consider mobility as a whole, systemically”, taking into account, for example, the bicycle industry which “represents a source of 230,000 jobs”. Damien Amichaud suggests that we “not suffer” these changes and instead rely on “initial training and lifelong learning”.

How can we define the jobs and professions of the ecological transition?

The French National Observatory of Jobs and Professions in the Green Economy, created in 2010 under the supervision of the statistics department of the Ministry of Ecological Transition, has been tasked with helping us better understand of the development of these professions and the skills they require. “We have defined an approach to identify what we call “green professions” and “greening professions” that are likely to take on an environmental dimension, and we have transcribed these definitions into the various statistical nomenclatures,” explains Sophie Margontier, head of the Green Economy, Professions and Training mission at the Ministry of Ecological Transition and Solidarity.

The “green and greening” professions have been estimated at “4 million jobs”. As such, 140,000 jobs are considered green jobs, representing 0.5% of total jobs.

Green professions are defined as jobs “whose purpose and/or skills contribute to measuring, preventing, controlling and correcting negative impacts and damage to the environment”. They mainly concern the following sectors:

Greening professions are made up of a diverse range of sectors and professions including:

However, Sophie Margontier continues, “71% of these professions are experiencing recruitment difficulties, starting with the building trades”. This is due to problems related to working conditions, a geographical mismatch between needs and availability of labour. Another obstacle to be considered is that “more than 80% of the jobs are occupied by men in the sanitation and construction trades”. Some sectors, on the other hand, are experiencing few recruitment difficulties: “socio-cultural workers, gardeners, laboratory workers, researchers and sanitation and waste treatment workers”. Training is one of the factors that explain the tensions, she says, highlighting “the need to focus on skills adapted to the employment area”.

Ludovic Bertrand, director of the Carif-Oref network, is working on this very alignment between skills and the employment area. He is conducting an experiment on the subject in the Centre-Val de Loire, Pays de la Loire and Normandy. “The employment areas all have sectors and specificities in which they are more or less competent”, he explains, inviting us to “question the homogeneous nature of the ecological transition over the entire territory”. To illustrate, he gives an example: “is this transition the same in the cereal-growing regions of Beauce as it is in the market-gardening or cattle-farming regions? The reality of different professions varies greatly from one territory to another, which is what we are trying to explore with this territorial experimentation”, he continues.

The aim of this approach is to “respond to the difficulty of finding the right skills in a given territory” and to ensure that the standardisation of skills at national level does not lead to the disappearance of some which are less common but still useful. He encourages us not to reproduce the error observed “in the machining trades where some companies continue to use a conventional lathe, whereas the skills have only been developed for numerically controlled lathes”.

“The association Fermes d'Avenir was created in 2013 to support the development of agro-ecology in France through: 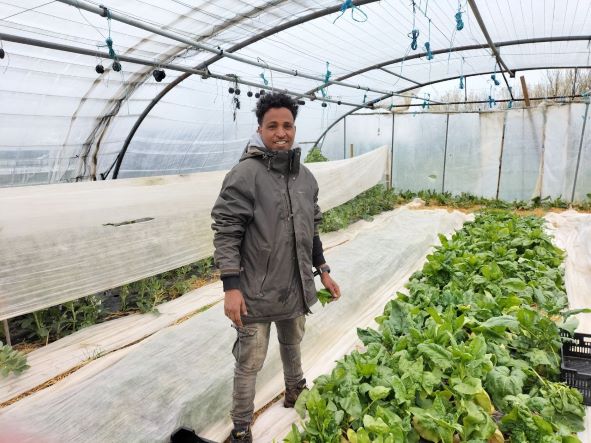 It is within this framework that the apprenticeship programme, an immersive and itinerant training programme, is being developed to teach the professions of agro-ecological market such as gardening and farm management. 30 apprentices are trained each year, including about ten refugees who hope to launch an agro-ecology project in France. Most of them are trained as farm workers or, for those who have the skills, particularly in language, as crop managers. Fermes d'Avenir is implementing an Erasmus+ partnership with four organisations comprising of very different training courses in France, Italy and Belgium. They have received about €100,000 of support over almost 3 years to share experiences. Fermes d'Avenir is the only organisation that provides apprenticeship to a refugee audience, which is of great interest to its European partners.”

Find out more about the Fermes d'Avenir mentoring programme

“The Être foundation was created in 2004, at a time when the ecological transition was coming to the forefront of public debate. At the time, I was working in a youth centre, and we wanted to engage these young people to become ambassadors for the transition. But when I went to talk with them, their concerns of making ends meet at the end of the month took precedence over any concerns about the end of the world. So, I had the idea of taking groups of young people into the field to help them discover jobs in the ecological transition. We developed training programmes of increasing length, up to and including degree-level. We have also created Ecological Transition Schools - there are now 10 in France: we start from practice, allowing students to see that they can do useful, concrete things and get results in just a day, and that this success can contribute to a project that is bigger than us: the ecological transition. From this practice we then move on to theory, not the other way around. 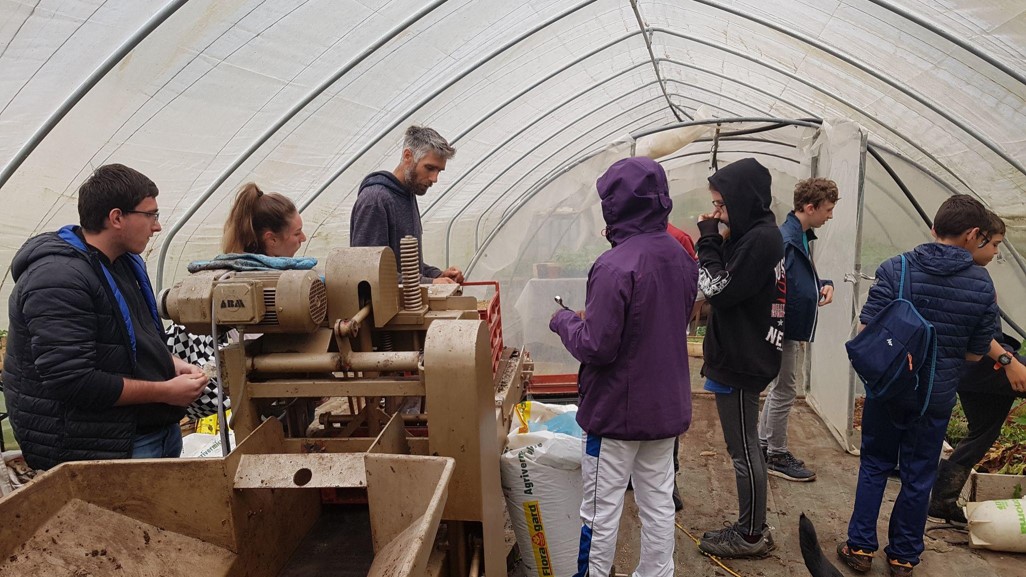 We are part of an Erasmus+ project which allows us to host young people and send them to other countries to discover jobs in the ecological transition. This project has also allowed us to set up a European network of schools for ecological transition with other structures to facilitate exchanges.

Find out more about the Etre foundation

“The Halage association was founded almost 30 years ago in L'Île-Saint-Denis, a district in the middle of the Seine, 10 minutes by public transport from the centre of Paris, with 8,000 inhabitants and 86 nationalities. It was created in response to two major problems: unemployment, reaching 35% among young people, and a degraded living environment. The association has 140 employees, 95 of whom are registered with the unemployment agency and whom we support and train. Historically, Halage works in the maintenance of green spaces and has a training centre which aims to promote nature in the city. We recovered a 3.6-hectare wasteland of polluted soil in a dense urban environment, and we took the gamble of bringing this soil back to life and reopening the site to the public by creating a park with leisure activities, encounters with art, and production. It is now the largest flower farm in the greater Paris area. We offer sustainable flowers grown in soil without phytosanitary products and we have developed a fertile substrate sector by giving new life to excavated soil. Finally, we created the company Les Alchimistes, which collects and composts organic waste and baby nappies, an activity that creates local loops and jobs. 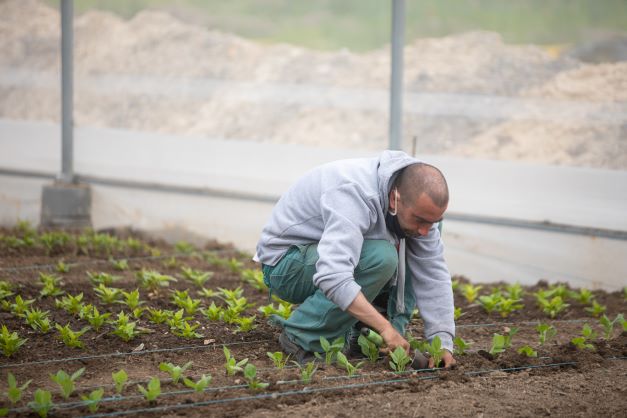 With the Erasmus+ programme, we have created a collective of commonly-minded partners, in Italy, Sweden, etc. This has allowed us to see that what we are doing almost naturally with our association is new elsewhere, and vice versa. Halage exists in a given territory at a given time but we can transfer our knowledge.”

Find out more about the Halage association and its work

“The EPALE web conference - Jobs of the ecological transition: opportunities for all citizens? - combines two major priorities of the Erasmus + programme: inclusion and the ecological transition”, says its interim director, Sébastien Thierry. “The first priority, inclusion, translates into incentives in the programme allowing those alienated from Erasmus + experiences can take part. The second priority, the ecological transition, though not necessarily natural for a programme that promotes mobility, is reflected in encouraging the use, where possible, of less polluting means of transport such as the train, in contributing to awareness of the issues raised by global warming by drawing inspiration from what is being done elsewhere, and in the development of the necessary skills, notably through internships in places where the transition is already playing an active role. The Erasmus+ / Education Training Agency has applied to become a European resource centre on ecological transition issues.

Find out more about the Erasmus+ programme

EPALE and the ecological transition

Watch the replay (in French) : here