“Sustainability” has become an important concept and guiding principle in various societal and political contexts. In adult learning, too, it is a hot topic.

“Sustainability” has become an important concept and guiding principle in various societal and political contexts. In adult learning, too, it is a hot topic (it appears, for example, as a key focus in the Hessische Blätter für Volksbildung, 2018/2 and in dis.kurs-Magazin, 2018/1).

The use of the term by various stakeholders often creates the impression that sustainability is a catch-all concept that covers everything relating to “resource preservation and durability” (Ebsen-Lenz & Egloff, 2018, p. 105) In the political sphere, however, sustainability was given a specific definition at the UN Earth Summit in Rio de Janeiro in 1992 which calls for “economically effective, socially equitable and ecologically sustainable development” (German Federal Government, 2018, p. 23). Presently, the focus is on the 2030 Agenda with its 17 global sustainability goals and indicators, and, in the field of education, on the concept of “education for sustainable development”.

The discussion surrounding education and sustainability is complex and varied, partly because so many aspects of education are relevant to the topic: environmental education, global learning, consumer education, and leisure education (de Haan, 2001). The concept of education for sustainable development is, according to Richter (2015, p. 1), “a framework of various pedagogical and didactic approaches that want to contribute to the education of responsible global citizens who are in a position to act”.

Given that adult learning is subject to very little regulation, and that programme planning is determined to a large degree by demand, social discourse, and institutional and individual priorities (see, for example, Gieseke and Opelt, 2005; Käpplinger et al., 2017; Fleige et. al, 2019), and because, as already mentioned, the pedagogical discourse surrounding sustainability is very varied, the question arises as to just what adult education centres mean by sustainability when they develop their offers and programmes in this area. This was the basis of a programme analysis carried out as part of the RetroPro 2 project on the digitalisation and completion of the publicly accessible digital adult education centre programme archive of the German Institute for Adult Education (DIE) on the basis of the materials and functions of the archive [DE] (Burdukova, 2019).

The aim of the programme analysis was to trace the understanding and interpretation of sustainability over time. By examining how the topic has evolved, the aim was to create a basis for reflecting upon current practice with regard to programme and provision development that focuses on sustainability i.e. to make it possible to analyse practice, and to actually do so.

The analysis incorporated offers that either explicitly refer to sustainability in their offer text or appear in a category in which sustainability is an important aspect. The sample contained around 1,100 offers from a total of 223 programmes from 40 adult education centres across 14 federal states from the years 1989–2014 (divided into three time periods 1989–1998, 1999–2006, 2007–2014) which were subjected to a content analysis.

The approach to sustainability is multi-dimensional, primarily ecological, and relevant to everyday life

Regarding offers that go beyond this common understanding of the term, two aspects were analysed: the topics, and the levels (of action or utilisation): everyday, local, or broad-scale.

The qualitative analyses (regarding the sample) revealed the variety of meanings contained in the sample: “sustainability” is used multi-dimensionally, to cover political, economic, ecological, and cultural aspects, among others.

The dimensions themselves reveal further sub-categories. On an economic level, aspects such as sustainable investment, fair trade, limits of economic growth, etc., are mentioned. The ecological dimension is particularly nuanced, encompassing aspects such as ecological construction and lifestyles, renewable energy, sustainable nutrition, biodiversity, and so on.

It is notable that the programmes of the adult education centres involved in the study do not focus equally on the different dimensions, which suggests significant differences among the institutions with regard to the overall topic.

However, the quantitative analyses and case studies in the sample, divided into three time periods (1989–1998, 1999–2006, 2007–2014), showed a clear trend: Despite the considerable diversity of offers, those with a broad-scale focus on political or economic aspects became relatively fewer over time, while those that emphasised ecological topics in relation to everyday life gained in significance. 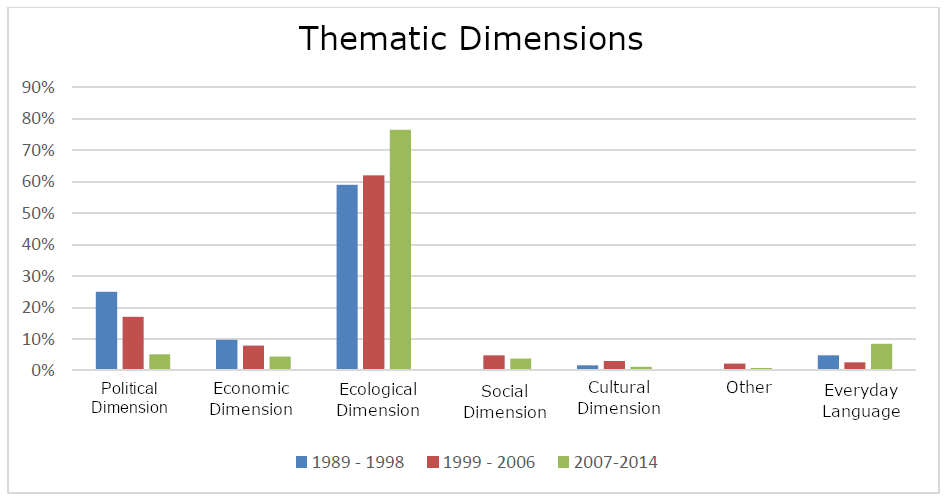 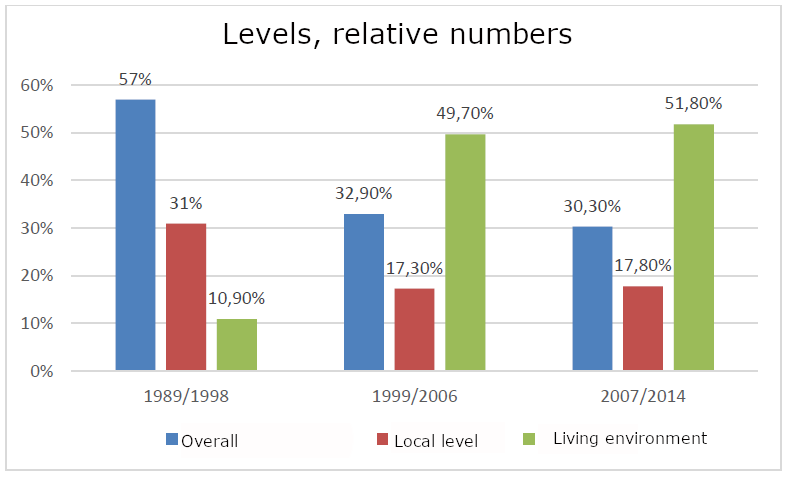 The case studies also revealed that over time there was fragmentation into social, cultural, philosophical, ethical dimensions, and so on. The trend is towards greater differentiation in this subject area, and thus a more nuanced understanding and approach to the topic.

The aim of the study was to trace the concept of “sustainability” in the offers and programmes of adult education centres. The results show that the understanding of sustainability as reflected in the offers of the sample is predominantly ecological and relevant to everyday life. However, the concept is multi-faceted and interdisciplinary.

Presumably, this diversity is not merely a response to demand, which varies among the regions, but is primarily driven by the awareness and interpretation of the discourse surrounding sustainability on the part of those responsible for programme planning, as well as by collaborations and networking at the local level. These factors are already visible in the practice-based reports in dis.kurs-Magazin (2018/1). Additional studies should be undertaken to verify this.

Return to the EPALE Focus on Sustainability and read other interesting articles on the topic!

About the author: Galina Burdukova has an M.A. in Adult Education, and was a research associate at the German Institute for Adult Education (DIE) (until 30 September 2019).