The new priorities and societal challenges such as inclusion and diversity, the green accent and digitalisation are also very important to me. 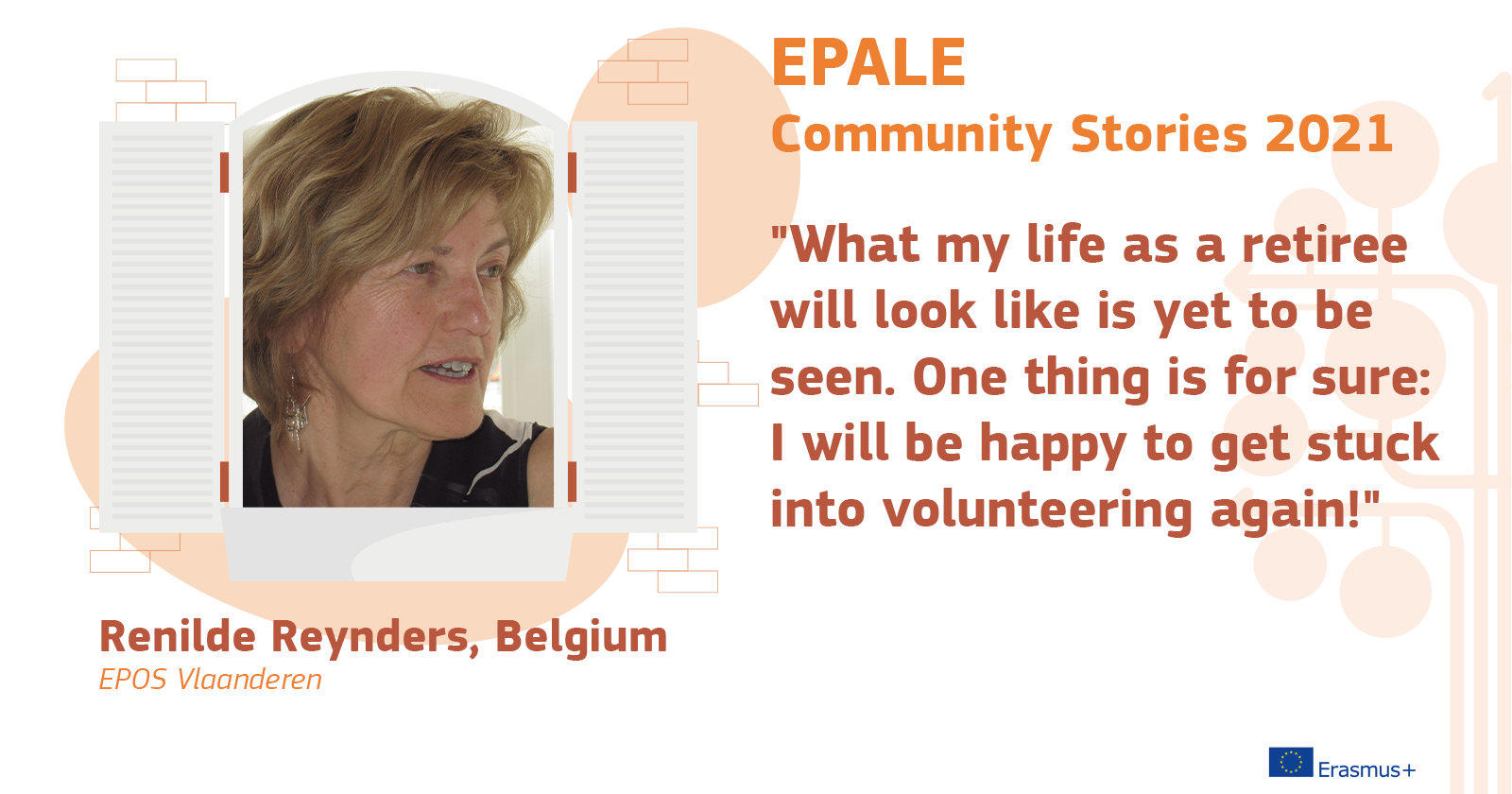 I have been working for the European education programmes in Flanders for 26 years and am now saying goodbye to my professional life. My career started more than 40 years ago as a teacher in the school I went to as a child. Before I moved on to European programmes, I taught English and Dutch for 17 years. I am finishing my career with the coordination of the European Day of Languages in Flanders. That will be my last major assignment.

I have known about EPALE from the start and consider the platform very important and necessary. This is also why I am an EPALE- Abassador. It gives visibility to adult education, even if it is virtually. In the digital world of EPALE there is a lot to be found. It is important to look for partners and to find training courses abroad. Although I would also like to argue in favour of a separate platform for vocational training.

Inspiration of the Mystic Lamb

By chance I heard in the early nineties about a meeting in Leuven for teachers from different European countries, where exchange projects were started under the name European School Project (ESP). I participated and made my first European contacts. We started a project with a Danish, French and Irish school. Pupils could participate voluntarily. Everything was done on paper, by post and without subsidies. At the time we did not yet use e-mails at our school and we had not managed to use the first electronic platform. I was very pleasantly surprised at the effect the project had on the students.

What surprised me enormously was that they started to write enthusiastically in English and French about the famous Flemish Primitives painting of the Adoration of the Lamb (The Ghent Altarpiece), for example, without any obligation. If I had given that as a writing assignment it would have been met with nothing but grumbles. This is how the European story grew at our school. Later we took part in the Europe Classes in Alden Biesen, followed by real exchanges. So, from school practice I got to know the European dynamic and became fascinated by it.

In 1995 a call was published for a coordinator for the brand-new Flemish SOCRATES agency. This agency would implement the first-ever European education and training programme, SOCRATES in Flanders. I was looking forward to spending a few years away from the classroom, although I was reluctant to leave school, even for a 2-year contract. I applied and got the job. Besides being coordinator, I was also responsible for the centralised actions, i.e. the applications that were submitted directly to the European Commission and in which the national agency played a much larger role than it does now. I became very involved in adult education, open and distance learning, teacher training and languages. After the first few years, I really got to know the subject matter and my assignment was extended several times.

In 2000, the European Grundtvig programme was launched, providing direct funding for projects submitted for adult education, both in the formal and non-formal sector. That seemed very interesting and challenging to me. Grundtvig was an adventure which I was ready to throw myself into, and that I hoped would become as big as Erasmus for higher education. I stopped my coordinating tasks and was thus able to concentrate completely on the adults’ component, alongside the schools’ programme, Comenius. I decided not to return to the classroom.

A very strong part of Grundtvig were the ‘learning partnerships’. These were small-scale collaborations with close involvement of the target groups. These have resulted in some great projects. In addition, teachers and educators could individually go on training trips abroad. I was able to help develop the Grundtvig programme, start it up and watch it grow. That was tremendously exciting, thanks to the inspiration and the enthusiasm of Alan Smith of the European Commission, the same man who developed the Erasmus student mobility scheme.

Organisational changes were also made. From 2007 onwards, the implementation of the programme was no longer allowed to be embedded in the ministry. Consequently, an independent agency, EPOS, was established in Flanders. EPOS used to stand for 'European Programmes for Education, Training and Cooperation', now it is no longer an acronym but simply epos, an epic poem. In addition, Socrates and Leonardo da Vinci, the programme for vocational education and training, were merged into the Lifelong Learning programme (2007-2014).

It was a wonderful and very user-friendly programme. It was closely aligned with Grundtvig's ideas, including the strong emphasis on lifelong and life-wide learning. In 2014 a major revolution followed. The European Commission decided to remove the various names such as Grundtvig, Leonardo, Comenius.

Everything ended up under the single heading of Erasmus+, with the + standing for everything that is not part of higher education.

Erasmus+ led to a shift in emphasis and, in my view, also to unification. Under Grundtvig, for example, we created the "senior volunteer project”, modeled on the JINT programme, which was and is intended for volunteers up to the age of 30. In Erasmus+, the focus on senior citizens disappeared, as did that on detainees, even training for adults with disabilities was compromised. One reason was that the programme’s policy on Adult Education was driven by DG Employment , work, whereas the definition of 'adult education’ clearly states that it concerns education that is 'not vocational training’. The question even arose as to whether an area such as adult education was still needed under Erasmus+, as there were programmes for vocational training already. That was shocking. Alan Smith had always been a great advocate of non-formal education and was able to draw attention to it. He was well respected because he had put Erasmus on the map. But he retired and his influence disappeared.

Fortunately, the latest Erasmus+ programme is once again evolving in a positive direction. For example, thanks to the 'small scale partnerships’, an easily accessible formula that is emphasised by clearer and separate criteria, tailored for smaller projects. I like that, although l fear that we will continue to receive more applications for the larger projects because they provide more funding. I personally find the term learning partnership much better than small scale partnership, because the latter lowers the sense of ambition.

The new priorities and societal challenges such as inclusion and diversity, the green accent and digitalisation are also very important to me.

In the meantime, European values have been somewhat overshadowed, it is much more about quality standards. However active citizenship and involvement in Europe also intrinsically improve quality. I noticed this myself among my pupils a long time ago. The impetus provided by European themes and a good project encourages quality work. We need more Europe and more cooperation. It is a pity that this is no longer an explicit priority in the programme. The introduction of the ‘lump sum’ for projects is certainly very good, although it still needs to be refinemed. I believe more in the 'unit costs', fixed amounts for project components. In order to build up a subsidy, they should give more guidance than one global lump sum. Generally, as a national agency we got further away from practice. This was also due to the way assessments and reporting had to be done.

One of my dreams remains the European voluntary service for adults. Fortunately, it reappears in the new Erasmus+! So I hope my successor will be able to draw extra attention to this, as well as to the importance of non-formal learning.

I hope to see continued attention paid to lifelong and life-wide learning in a European context, and this for all adults: seniors, young retirees, prisoners, people with disabilities, in socio-cultural or economic difficulties...

To achieve this, however, the non-formal initiatives will also have to invest more in a system that makes visible what is being 'learned'. The system requires that in one way or another, the impact of that offer on the participants can be assessed or measured.

Although, in my opinion, participation in non-formal learning certainly has its value and I am surprised that the OECD does not have or collect figures on it. I do hope that more attention will be paid to this form of learning. After all, it is so important for functioning in society.

Now my professional commitment to this European story ends, but perhaps I can remain an EPALE ambassador and write articles about European projects for EPALE? What my life as a retiree will look like is yet to be seen. One thing is for sure: I will be happy to get stuck into volunteering again!

Did you get inspired by this story? Let us know below in the comments and get the chance to win an EPALE unique gift!

5 users per month (May-November 2021) from those commenting on a 2021 Community Story will be picked at random and will receive a gift. Comments must be relevant and related to the topic to be eligible.