Lieux Fictifs- A space for research, education and collaborative creation 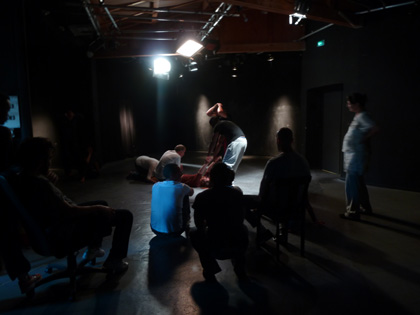 A space for research, education and collaborative creation

Art at the frontier between lands and people

Lieux Fictifs is a collaborative space for creation and visual literacy, which develops artistic activities around the theme of the “frontier”. We invite artists to compare ideas on the question of transforming the frontiers which stand between territories and people, be they physical frontiers (such as prisons), social, cultural or generational frontiers, or frontiers between artistic forms and image and sound materials.

In this space, which combines research and creation, we welcome filmmakers and artists (directors, choreographers, sound artists, writers, etc.), along with academics.  This question of the frontier is an issue in social and cultural occupations and also in scientific and artistic fields of study.

Alongside this, we are developing a policy of disseminating and publishing our work for the public, as part of a dialogue between Art and Society.

The education and creation projects are run, for the most part, with people who are on the wrong side of the law, in prison or in open custody, or with other bodies such as universities, schools, residential homes, youth clubs, social centres, education and integration centres, etc. These territories are often interlinked, as they work together on joint projects.

In this space, creation means trying things out, taking risks in the social space, attempting to reconstruct individual and collective narratives or devise new performances, in places and times which fragment them, separate them and erase them. The artistic experience is considered a process of transmission and education, which enables all participants to see things from a different angle, to re-envisage themselves.

The role of the artist in writing and producing artworks, as well as the role of art in society, are at the heart of this research. We consider art to be an experience of perception, of space, of time and of emotion, an individual experience which can pass from one to another, leading to a mutual clarification of meaning.

These experiments involve putting people (adults and children) together in a variety of artistic situations (involving movement, sound, drawing, story-telling, images). This could lead to the creation of collaborative works or form part of a participatory workshop.

For about ten years, Lieux Fictifs has been involved in various projects, in Europe and around the Mediterranean, which have led to developments in a number of areas: research and training through the sharing of good practice among artists and institutions, the staging of public meetings and organisation of workshops and the creation of innovative educational, training and assessment resources.

Since 2014, the association has launched and is now coordinating the “In living memory: educational and creative process with European archives” project, which is supported by the European Union’s Erasmus+ programme. In addition to Lieux Fictifs, the project involves three arts organisations which run non-formal educational projects (TransFORMAS, coopérativa sociale e.s.t.i.a, PhotoART Centrum), a university (Westerdals) and three institutions which maintain archives (Institut National de l’Audiovisuel; Fondazione Cineteca Italiana, Institut Municipal de Museus de Reus – Centre de la Imatge Mas Iglesias). Its aim is to instigate an innovative process, based on the creation of collaborative arts compositions, which brings together those in prison and outside (adults and children) and uses archive images of different countries to encourage intercultural dialogue between the participants. The project explores the possibilities for individual and collective appropriation of the archive image by transforming it. It also aims, through testing methodologies in workshops involving artists and participants, to create methodological tools with which to disseminate them. A number of researchers are also involved in the process, their role being to build bridges between organisations delivering non-formal and formal education.