Since 2013, twelve museums in the Netherlands have been making art accessible for people with dementia and their loved ones. In September a publication will be issued with practical tips, reflections and research results which other museums and cultural institutes may use to learn how they can set up a similar programme. 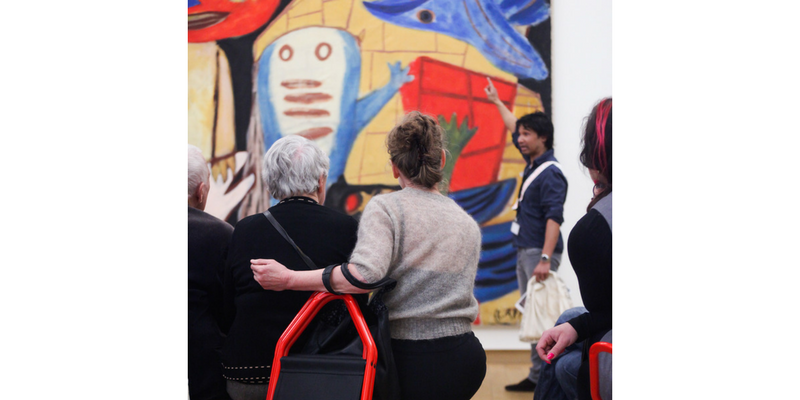 Since 2013, twelve museums in the Netherlands have been making art accessible for people with dementia and their loved ones. In September a publication will be issued with practical tips, reflections and research results which other museums and cultural institutes may use to learn how they can set up a similar programme.

Under the name ‘Unforgettable’, Dutch museums are giving special guided tours in which art is viewed and discussed in a relaxed and positive atmosphere. ‘The focus is on positive aspects, not on the illness,’ Anouk Heesbeen, an Outreach employee of the Stedelijk Museum in Amsterdam, explains. 'Loosing your ability to do certain things is negative, but viewing art is something everyone can do, so that’s positive.'

The tour is more than just a nice outing for the visitors. Dementia sufferers benefit from activities, especially when they take place in an inspiring and safe environment (such as a museum) in which their condition is not an issue.

'We believe that a museum should be accessible to everyone, and that includes this target group, who should be made to feel at home here,' Heesbeen explains. 'This involves how you deal with certain vulnerable groups and your degree of physical accessibility (thresholds, wheelchair lifts, audio equipment), but above all your educational approach.'

The Stedelijk Museum Amsterdam and the Van Abbemuseum in Eindhoven set up the Unforgettable programme in 2013, inspired by Meet Me at MoMa at the Museum of Modern Art in New York. The initiative was highly successful in both Dutch museums.

With financial support from the Gieskes Strijbis Fund, an implementation and training programme was developed that enabled another ten Dutch museums to set up an Unforgettable programme themselves (see text box).

The Enquiry-based learning method (the key element of which is the tour guide asking lots of questions) is used to encourage the thinking process and stimulate an emotional response. Sometimes the tour also invovles music (for example a Boogie Woogie track next to the Mondrian painting) or smell. This gives people with dementia the possibility to express themselves and engage in a dialogue with their environment. In addition to the positive effects on the dementia sufferers themselves, this also benefits their relationship with caregivers. The guided tour is also a good way to come into contact with people with the same condition.

The expansion of the project was accompanied, described and evaluated by means of extensive scientific research of the VU medical center (VUmc), department of psychiatry. It also researched the implementation.

The research results of the VUmc confirm the importance of meaningful activities as memorable for the quality of life of people with dementia and their families. In addition, it appears the program contributes to the understanding around dementia, and consequently to a more dementia friendly society.Hidden emotions

Generally, the Unforgettable-guided tours and workshops evaluated positively by the participants; the average rating is a 8 and a vast majority (91%) would like to participate again. In addition, the participants leave the museum in a better mood. Especially the social interaction during Unforgettable is appreciated by the participants, as well as the involvement and kindness of the guides and volunteers who run the program. Family caregivers also appear to appreciat the response of their loved ones with dementia, for example by their enthusiasm, spontaneity and their interaction with the other participants. A part of family caregivers (40%) got a different kind of contact with their loved one: 'by talking about the works of art, we got a view on the emotions of my mother. That works less well in everyday life. 'The program also has impact on the relevant museum staff. The trained guides and volunteers ended up with a more positive image of people with dementia. They had more knowledge about dementia, saw people with dementia more as individuals and were more optimistic about the possibilities and future of people with dementia. Even those museum staffmembers that were not directly in contact with this special group fellt the changes with regards to the image.

Other interested (Dutch) museums and cultural institutions may want to set up a similar programme. On September 21st ( (World Alzheimer's day) a publication appears with practical tips, reflections and research results. The publication contains detailed information about the target group and the deployment of the Unforgettable method. The publication focuses first of all on cultural institutions, but can also be used by health care institutions for people with dementia, who want to deploy in their art and culture activities.

For people with dementia and their loved ones all organize Unforgettable museums in the week of World Alzheimer's day free Unforgettable-guided tours.

This story is part of the theme page on  Museums & Galleries - A learning environment for adult education.