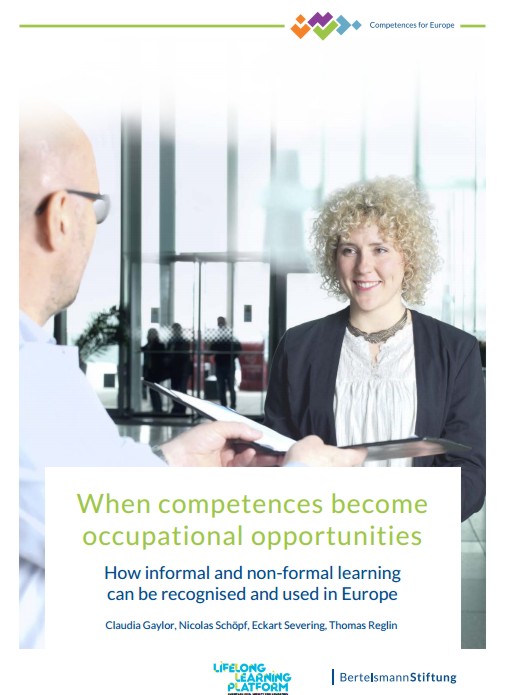 This brochure that was published in cooperation with the Lifelong Learning Platform at the education policy challenges which arise in respect of the validation of non-formal and informal learning in Europe focusing on persons with low levels of formal qualification. It builds upon a study (see Gaylor, Schöpf, & Severing, 2015 for the Summary in German) on the recognition of non-formal and informal learning that was conducted within the scope of a Bertelsmann Stiftung project entitled “Continuing training for all”. The object of investigation was the current nature of such procedures in eight European countries. In the continuation of this work presented here, which is based upon the examples of good practice identified in the study, possible courses of action are developed which are directed towards decision makers in the European Union and its member states at a policymaking, economic and societal level. The aim is to structure education systems in such a way so as to render them accessible also to persons with a low level of formal qualifications. The study forming the basis of the investigation is available in German from the Bertelsmann Stiftung (Ed.): Anerkennung von Kompetenzen. Was Deutschland von anderen Staaten lernen kann. Gütersloh 2015 (ISBN 978-3-86793-582-1).
Resource Details
Resource author
Claudia Gaylor, Nicolas Schöpf, Eckart Severing, Thomas Reglin
Copyright status
No cost. Freely available to download.
Type of resource
Studies and Reports
Publication Date
Fri, 02/26/2016 - 12:00
Language of the document
English
Resource link
When competences become occupational opportunities
Themes addressed
Non-formal and informal learning