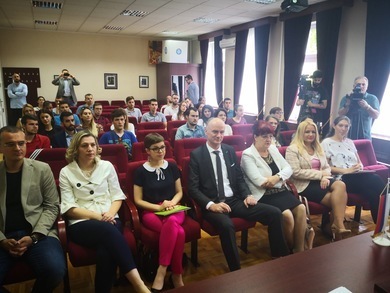 On 9 July 2018, certificates on successfully completed practice and participation in the '3D Academy', part of  the 'Moja praksa' project, were awarded to 36 students of the University of Banja Luka. These students were provided with practical training so they became competitive on labour market.

In the '3D Academy' programme, 16 students were introduced to this type of technologies, whereas 20 had practical training in several companies in Banja Luka within the 'Moja praksa' programme.

Prof. Radoslav Gajanin, Rector of the University of Banja Luka, said that the aim of the University was to introduce more practical training to all faculties. He added that the aim of the Project was for the students of final years of studies to obtain work experience in order to add it to their CVs, which would make them more competitive on labour market. In addition to this project, as he pointed out, our students successfully completed practice in cooperation with the City of Banja Luka and companies owned by the City. The Rector revealed that a contract would soon be signed with the Banja Luka Business Club, representing more than 40 private companies from the Republic of Srpska, so the students would soon be able to go through practical training in those companies as well.

Ms Jasmina Davidović, Minister of Family, Youth and Sports of the Republic of Srpska, said that the project would be expanded in future, and that one of the aims of her Ministry was to include as many students as possible in this type of activities.

Mr Predrag Govedarica, the project manager at the Centre for Entrepreneurship and Technology Transfer of the University of Banja Luka, said that there was huge interest among students for participation in the '3D Academy'. 'However, due to technical capacities, it was possible to include only 20 out of 99 who applied,' he said and added that he hoped the Ministry would recognize the significance of the Project and continue providing their support.

Ms Nikolina Bulović, a final year student of Graphical Engineering at the Faculty of Technology of the University of Banja Luka, said that the participation in the '3D Academy' was very useful and that practice should be the pillar of education.

Conference on the Future of Europe