People we work with always have a problem of being heard despite the fact that nowadays we have social media and anyone can become an influencer. 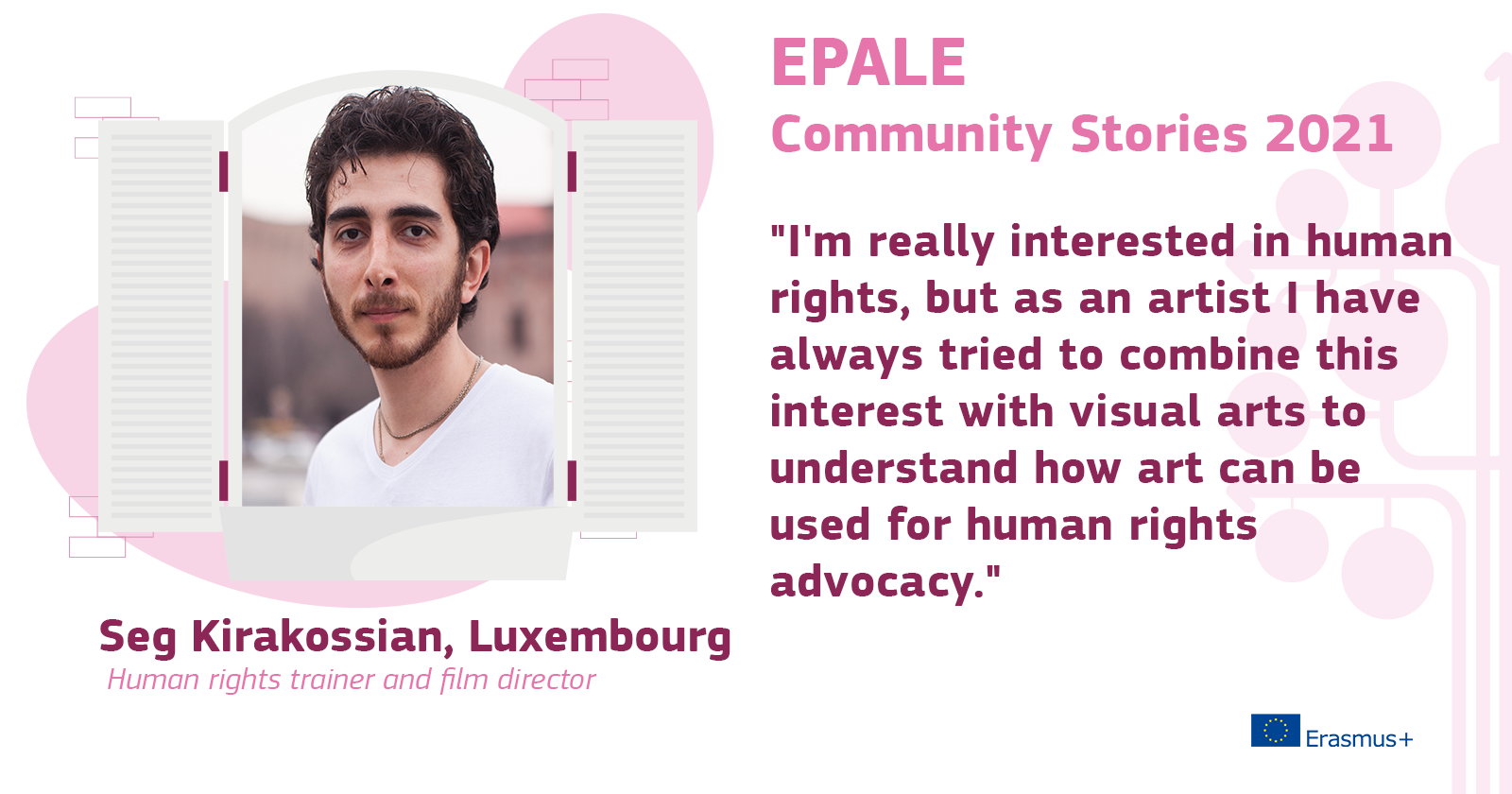 I'm Seg and I am 31 years old. I am a human rights trainer and film director. While implementing non-formal educational activities for youth and adult people, I try to combine my two fields of expertise to bring positive changes to active community members and leaders across Europe who are interested in acting as multipliers of humanism and respect. I'm lucky to be one of the founders of the Formation et Sensibilisation de Luxembourg educational organisation.

I'm used to using EPALE to share the results of our long-term projects of Erasmus+, including our in-depth research. I hope it helps other youth workers and social workers. The findings of other projects help me and my colleagues as a base for new projects. I was a bit skeptical when I learnt about EPALE, but now it's an integral part of my work!

I'm really interested in human rights, but as an artist I have always tried to combine this interest with visual arts to understand how art can be used for human rights advocacy. Films that I or our participants shoot during the project have really helped people to be heard.

The first international project which combined the topic of human rights and filmmaking was MovieDoc in Dilijan, Armenia. Youth workers from 8 countries were involved in this project, and we also had participants with Autism Spectrum Disorder. It was an opportunity for the participants to communicate and work with people with autism, and at the same time it was an opportunity for autistic people to travel (maybe for the first time) and to be a part of something big. Of course, it was a great challenge for the whole team and me as a trainer. The best feedback for me, however, was a letter from Seryoja's mother - our participant from Russia. She shared how her son had never eaten with other people before the project, but he was finally able so after taking part.

I decided to continue with this experimental method of filmmaking, and we started the DocuSpeech projects - DocuSpeech against Hate Speech and DocuSpeech for Human Rights. During these trainings, youth workers studied how to make their job more visible through arts and how to increase the emotional impact of their work with short documentaries and visual arts. During the No Hate youth exchange, filmmaking was just one of the different art forms we used in this project alongside theatre, cinema, music, and painting.

The Art Inclusive project was organised for adult learners with the aim of teaching youth workers to use theatre and cinema in their work involving people with disabilities. The project consisted of 2 parts; one held in Luxembourg and the other in Armenia. Now we are thinking of continuing it in Poznan, Poland, where two of our most devoted and active participants, Roza and Peter, live.

Moviemaking as a creative method can be used in really different projects and for a wide range of topics. For example, our current KA2 project Women Creative Power was organised for migrant or expat women from 4 countries who had some business ideas. Besides giving them managerial skills we also taught them to make short promotional videos for their future initiatives.

People we work with always have a problem of being heard despite the fact that nowadays we have social media and anyone can become an influencer. Knowledge of filmmaking techniques is a great tool for every youth worker. Of course, I will not be able to make filmmakers out of our participants during neither 1 session, nor a week-long-project. What I like most of all is when participants understand after just one session that they can be much more creative than they ever thought.

My strongest weakness is time management. When we were organising our first one-week program, I was convinced that we would have too much time to fill with the different activities. Soon, I realised that we did not have enough time to do all the things I had planned. I am having the same issue today; we are organising long-term KA2 projects, and each time I realise that even 2 years are not enough to achieve as much as I would like to do.

During these 10 years of travelling and teaching all around the world, I also started my movie titled PURIFICATION. It's a poetic documentary which brings together all my observations from 15 countries to show how people are destroying the world by their greed.

I have always tried not to mix my vision as a youth worker and trainer with my filmmaker's vision, but after all these years, it is becoming harder and harder. So, this last movie of mine also contains a social element, even though my intention was only to make art.

Adult Education: A Journey with Those Who Make the Roads

CETAL (Emancipatory Skills for Food Transition) Research-action project , Focus is on skills that foster precarious public’s emancipation and positioning them as actors

Blended learning in adult education: improve your skills and accessibility for target groups