The Europe 2020 strategy, seeking to turn the EU into a ‘smart, sustainable and inclusive economy delivering high levels of employment, productivity and social cohesion’, is a significant development in social policy within the EU, designed to develop a more balanced and sustainable approach for the future. Adopted in 2010, its inclusion of targets aimed at increasing employment, improving education, and reducing poverty and social exclusion are considered significant because they highlight the importance of social policy goals in the vision for Europe’s future well-being.

But its target of 15% adults engaged in lifelong learning is problematic as it only takes into account formal and some non-formal learning.

In this article I ask ‘Should we not be giving more attention to informal learning as the oxygen of a lifelong learning society?’

As Andrew Bollington (Global Head of Research and Learning, LEGO Foundation) noted in an OECD Business brief: Why isn't everyone lifelong learning? ‘Being educated is no longer about how much you know, but about having the skills and motivation for lifelong learning so that you can learn new knowledge whenever you need to.’

The importance of informal learning

The Republic of Ireland’s Central Statistics Office (CSO) 2017 Adult Education Survey Report notes that ‘Informal learning is a more popular choice than formal or non-formal educational activities,’ and reported that over 60% of Irish people aged 25-64 participated in informal education.

The trends across Europe are similar with a 60.5% participation rate across the EU28 as measured by the Adult Education Survey in 2016. Of course, there are variations, with Cyprus reporting almost 100% participation and Lithuania reporting 22%.

Learning using computers (online or offline) was the most popular with 82.2% of those who engaged in informal education in Ireland reporting it. Younger persons are more likely than older persons to learn informally using a computer and those with a third level honours degree or higher were three times more likely than those with a primary education or below to engage in informal learning (Figure 7 below for Ireland). 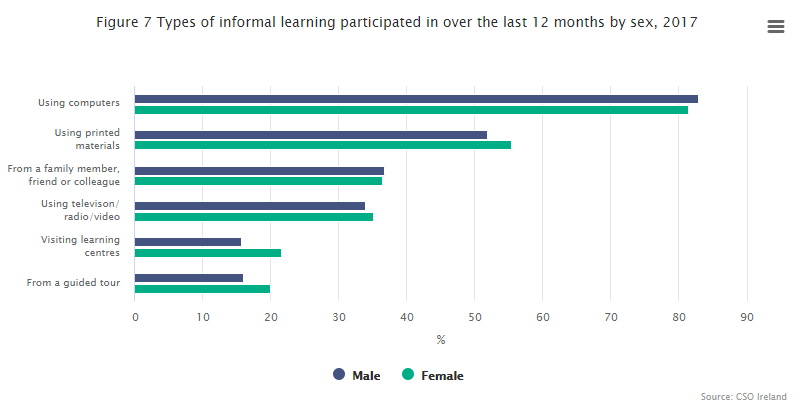 In its glossary Cedefop defines informal learning as ‘[L]earning resulting from daily activities related to work, family or leisure. It is not organised or structured in terms of objectives, time or learning support. Informal learning is in most cases unintentional from the learner’s perspective.’

A learning activity is considered to be informal when:

Informal learning generally refers to activities different from those deemed compulsory (including self-study and homework). These are reported under formal and non-formal learning. Informal education activities are usually carried out:

Informal learning takes place outside schools and arises from involvement in activities that are not undertaken for learning purposes. The Classification of Learning Activities (CLA) Manual, 2016 Edition, notes that there is one fundamental criterion that distinguishes informal learning from education and training (formal and non-formal). This is whether the learning activity is institutionalised or not.

Therefore, it is incidental, involuntary and an inescapable part of daily life; sometimes called ‘experience’.

Can we really separate formal, non-formal and informal learning?

Stephen Billett's 2001 in Learning Throughout Working Life: Interdependencies at work questions a contrived separation of learning into formal, non and informal learning. He claims all human activity is learning – everything we do involves a process of learning. Billett suggests that most learning takes place within social organisations or communities and outside of formal education. I often reflect on how much I have learned through my involvement in non-formal community organisations – much of which I have applied to my professional work life.

ICT has contributed very significantly to my opportunity for learning in the crevices of my busy world. It may be a piece of music, a poem, current affairs, or how to do an immediate task. For example, I am a visual learner and I use YouTube for informal leaning on a continual basis.

A wealth of (informal) learning

YouTube is increasingly a source of informal learning. The figures are staggering. The total number of people who use YouTube is 1,300,000,000 and 300 hours of video are uploaded to YouTube every minute. A 2018 US research study found that 51% of YouTube users say they rely on the video service to learn how to do new things – informal learning.

The following is a sample: ‘The first time I put on a tie, I loaded up a YouTube video. Any time I want to do something new in a programme like Ableton, Premiere, or Photoshop, I run a search on YouTube. I’ve learned how to cook a few things from YouTube videos, too. These are just the sorts of educational searches I’m willing to admit; there were too many embarrassing ones that will go with me to my grave. But I’m not alone in using YouTube as a digital school of sorts.’

For further examples of informal learning on the EPALE platform see:

Informal learning as oxygen for a lifelong learning society

So, this post is an argument for a greater recognition of informal and non-formal learning as the oxygen of a lifelong learning society. It is an argument for enabling creativity, curiosity and democracy in learning and a pull back from a formalised certification system predominantly focused on fostering a high-employment economy.

Michael Kenny is an Adult and Community Educator with a particular interest in engaged participation. His upbringing is farming and rural within a West of Ireland migrant family. His higher education is an agricultural science degree (BAgrSc 1980), rural development masters (MAgrSc 1990), and higher diploma in higher education (HDHE1998). His experience is youth work, community work in Ireland and Africa (7 years), and extensive engagement with formal, non-formal and voluntary rural and urban organisations.

Themes addressed
Non-formal and informal learning
Validation of prior learning

From Tradition to the Future, Together with the Youth