One in five adults has no secondary education qualification and unemployment increased by 1-2% between 2019 and 2020 due to the COVID-19 crisis. 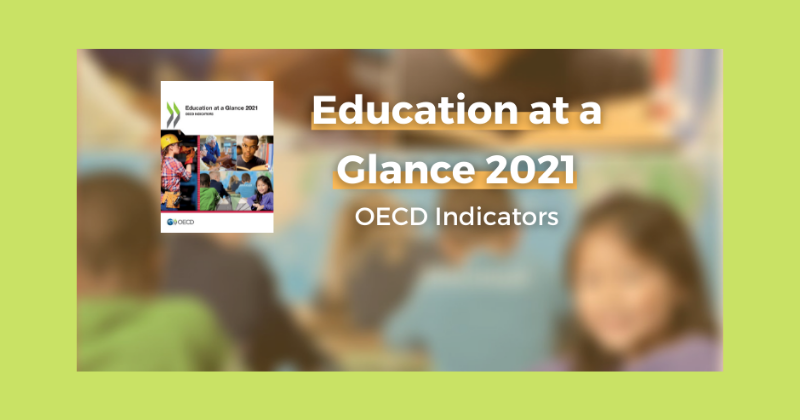 Research has shown that one in five adults across the OECD has no secondary education qualification. Moreover, unemployment increased by 1-2 percent between 2019 and 2020 due to the COVID-19 crisis. These are two of the most critical findings published by the Organization for Economic Co-operation and Development (OECD) in its last report “Education at a Glance 2021”.

Lifelong learning, therefore, is becoming more of a critical and urgent priority for adults to upskill and reskill in such a fast-changing world. Yet, more than half of adults did not participate in adult learning in 2016, and the pandemic further reduced opportunities to do so.

In 2020, women made up only 45% of adults with a doctoral degree on average across OECD countries. Women are also less likely than men to enter a STEM field of study, although the proportion of women has increased in just over half of OECD countries according to data between 2013 and 2019.

There is ample evidence to show that the provision of adult learning allows adults, whether employed or looking for a job, to maintain and upgrade their skills, acquire the competencies needed to be successful in the labour market and strengthen their overall resistance to exogenous shocks such as the current COVID-19 pandemic.

The benefits of adult learning extend beyond employment and other labour market outcomes. In fact, adult learning can also contribute to non-economic goals, such as personal fulfilment, improved health, civic participation and social inclusion.

The OECD report shows that on average participation by low-skilled adults is a staggering 40 percent below that of high-skilled adults across the represented countries. Older adults are 25 percent less likely to train than 25 to 34-year-olds. Workers whose jobs are at high risk of automation are 30 percent less likely to engage in adult learning than their peers in jobs less at risk of automation.

The research has produced other relevant results:

What is the situation in the various countries?

On average, about half of the surveyed adults (aged 25-64) had participated in adult learning (formal and/or non-formal education and training) in 2016. Participation rates varied widely, from 30% or less in Greece, Lithuania, Poland and Turkey to more than 60% in the Netherlands, Sweden and Switzerland.

In addition, data shows that employed women were more likely to participate in training compared to employed men. In addition, across OECD countries, 25-64 year-old women tend to participate slightly more in adult learning than men of the same age (formal and/or non-formal education and training), regardless of their labour market status.

…and what about the most common reasons for not participating in education and training?

In particular, data suggests that family responsibilities, such as caring for children or the elderly in the household, are a stronger barrier to participation in adult learning (in formal and/or non-formal education and training) for women than for men. On average across OECD countries, 40% of women cited family responsibilities as a barrier to enrolment, compared to 25% of men. Gender differences are particularly evident in Australia, Chile, the Czech Republic, Germany, Greece, Japan, Korea, Mexico, the Slovak Republic and Turkey. In these countries, the share of 25 to 64-year-old women stating that they wanted to participate in education and training but could not because of family responsibilities is at least 20 percent higher than men who said the same.

A recent OECD brief shows that, according to certain assumptions, COVID-19 induced lockdowns of economic activities decreased workers’ participation in non-formal learning by an average of 18%, and in informal learning by 25% (OECD, 2021).

We can see that, compared to the same quarter in 2019, the number of adults reporting they participated in formal and/or non-formal education and training in the month prior to the survey decreased significantly in the second quarter of 2020. This is particularly evident in Austria, the Czech Republic, Denmark, Estonia, France, Latvia, Poland, the Slovak Republic, Slovenia and Switzerland, where the number of adults participating in formal and/or non-formal education and training decreased by 30% or more between the second quarter of 2019 and the second quarter of 2020, for both women and men (i.e. during the peak of the first wave of COVID-19 in Europe).

Most likely, the steep drop in participation observed between the second quarter of 2019 and the second quarter of 2020 is a consequence of the widespread lockdown restrictions implemented during the first wave of the pandemic. During this period, non-formal education providers needed some time to adapt to the provision of online-only courses

Although participation rates in non-formal education do not differ much by gender (45% for women and 44% for men), men and women tend to pursue different fields of training. Data shows that, compared to women, men are more likely to follow training initiatives in the field of information and communication technologies (7% for women and 10% men); engineering, manufacturing and construction (3% and 13%, respectively); and services (15% and 23%, respectively).

On the other hand, compared to men, women are more likely to take part in non-formal and training initiatives in the field of education (4% for men and 10% for women), arts and humanities (7% and 11%, respectively), and health and welfare (9% and 19%, respectively).

Finally, men and women are equally likely to participate in non-formal education and training programmes in the field of social sciences, journalism and information (3% and 4%, respectively) and business, administration and law (18% for both men and women).

Puk Witte: the role of experts by experience